What you call resolutions 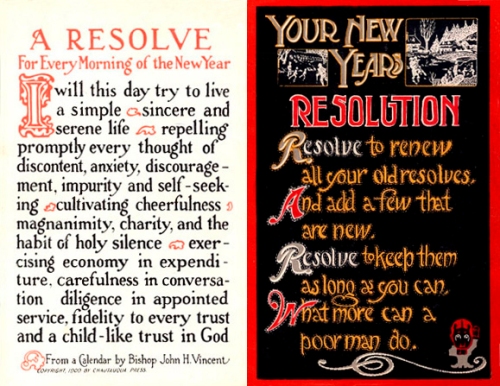 2011 is only only a scarce day away from being completed. For me and I’d say for many other’s as well that means it’s time to make up your mind about the dawning year. Many people resolve to make healthy changes in the New Year and deciding upon a couple specific resolutions can certainly be motivating. But often times they can easily frustrate us too and that needn’t be if we just take a few things into consideration:

Keep it simple
This doesn’t mean that the goal is easily achieveable, it mostly refers to the phrasing. For example: Lose 2 lbs every week is very specific and contains more than one figure. I am not saying that it isn’t an achieavble goal – it certainly is. But because of the many figures it contains – number of pound to be lost plus a set time frame – it becomes a more complex goal and thus constrains you in the ways you could be achieving the goal that is lying at heart here; which is to lose weight. One way to simplify your goals is to…

…avoid numbers.
It is still important to be specific about what you would like to achive but the success should not be dependant upon numbers. Instead of Write 3 short stories it should be Write more, and instead of Lose 2 lbs every week you make lose weight your goal.

Make your goals achievable
Instead of setting up a few huge goals, I make a list of many small ones. That way it won’t take long until I start being successful. So don’t be overly ambitious and respect your own limitations. A good way to achieve an overly ambitious goal anyway is to…

…make the way your goal
Break down an overly ambitious goal into many small ones that will help achieve it in the end. Think about what you need to do to achieve your goal. If you seek to lose weight then you might want to make change eating habits, watch less TV, go outside more often, start a new sport, join a gym and use staris instead of elevator your goals.

At least, these are the things I try to take into consideration this year since I didn’t really achieve any of the goals I had set for 2011. I’d like to do better next year.

I’m really looking forward to 2012, I’v got a feeling it will be a great year with many changes to come, new things to learn and old things to keep up 🙂

So what are your New Year’s Resolutions?