This postcard came all the way from the Spanish island Tenerife off Africa’s west coast. So it traveled 2,154 miles (3,467 km) in 11 days to reach my mailbox and me in Germany. 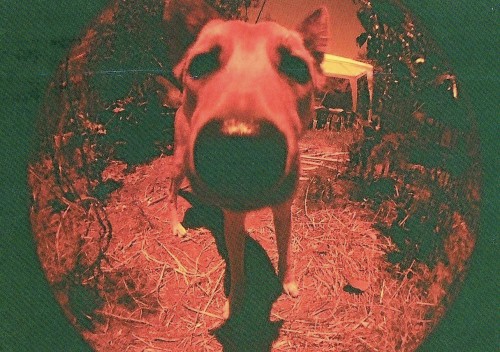 Noelia – or nosoyrosanna (I’m not Rosanna) as she calls herself on Postcrossing – is very passionate about photography and enjoys old school cameras using film. She owns two lomographic cameras and has her own little website to share her pictures with the world > http://www.lomography.es/homes/deprofundis

The postcard’s design is one of Noelia’s original photographs. It shows her friend’s dog “Bender” (yes, her friend named the dog after the Futurama character – lol). She used an extreme wide angle fisheye lense and redscale film. It’s definitely one of the most interesting cards I’ve ever received; I wish I had a fisheye lens…