The Finns, their dogs and a nifty gadget

gadget to have. It came with so much great software too, like Corel Painter and Photoshop. I already had PS but was in dire need of a version upgrade – seriously, I’d been stuck with PS Elements 2.0 until I got the tablet. I can be so cheap sometimes!

Okay, enough of the geeky computer-software-talk and on to the more interesting part of what I did with my new shiny:

Mostly I had intended to use it as a digital drawing and painting tool but I soon noticed that somehow it’s just not my thing – I love my real paints, pens and papers way to much! I have a friend who creates really cool Manga/Anime characters with the help of her tablet. Like these…
.

I don’t know how she does it. They are amazing, aren’t they?

Well, even though I do not use my tablet to draw or paint, it has become a very handy tool for me when editing and altering photographs in Photoshop and sometimes Corel Painter too. The first real project I tackled using my tablet was – of course – creating a postcard for a fellow postcrosser.

It was my 15th sent postcrossing card which went to Pirkko in Finland. She loves dogs and has three of her own. On her profile she mentions that receiving postcards featuring a picture of a national dog breed would make her day – and hey, that’s what I want to: Make someone’s day a little brighter by sending them a lovely postcard! So, off I went to create a German-dog-breed-card for Pirrko using my graphic tablet, Photoshop and Corel Painter. And this is it: 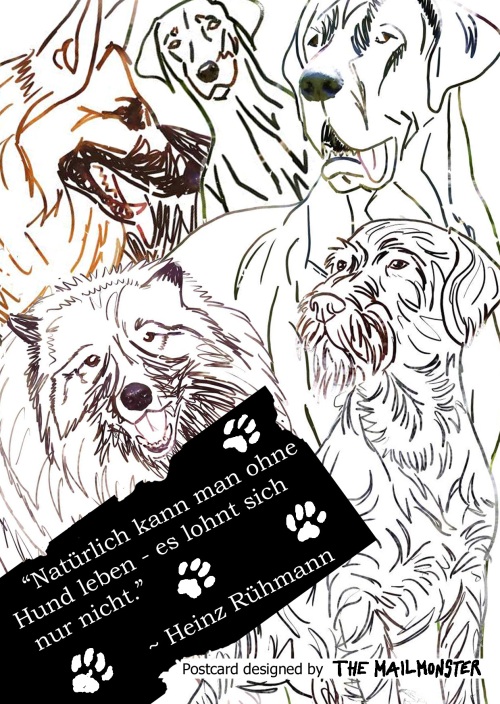 I created it using a simple layering technique: First I created a collage using different images of German dog-breeds and then covered it with a simple white layer. With a few sketchy strokes of my tablet pen and some Corel Painter magic I made the dogs visible again as rough sketches. I didn’t just trace the images; I removed the white in the top layer to make the color of the dog images beneath reappear. I hope you get what I mean.  The finishing touch was adding the black quote box and my signature at the bottom in a third layer and voila: A German-dog-breed-card for Pirrko!

“Natürlich kann man ohne Hund leben – es lohnt sich nur nicht.”
(“Of course you can live without a dog – it just isn’t worth it.”)

When I printed it I also experimented with different color paper. Ten postcrossing-cards later (#25) I sent the exact same image printed on yellow paper to the also Finnish and dog-loving Kirsi – especially Finns seem to like dogs a lot for some reason : ) while Russians seem to be cat-people (but that’s a different story altogether)

Well, my dog Fredi and I send greetings to all dogs and their doggy people out there! 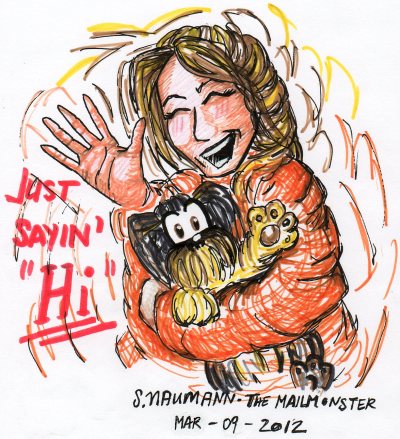 I had some fun sketching in ink and felt markers as you can see : P

Have a great Friday! *bark*